Something already smelled dank from the bottom of a staircase. Upstairs, in a large, airy room with a view of Portland, Oregon, guests were passing around a seemingly infinite number of joints, while others queued up near a bud bar, sampling strains like Kosher Kush. A woman wearing a flowy top stood in a huddle with four men, one with a large white yarmulke (Jewish skull cap), strumming guitars or beating hand drums. Meanwhile, hosts Roy and Claire Kaufmann were running around, greeting guests, ensuring that everything was in order for their annual cannabis seder.

The holiday of Passover commemorates the Jewish people’s exile from Egypt where they’d been enslaved for generations. Passover celebrates liberation. Accordingly, Jews gather every spring over a seder or ritual feast, featuring a number of symbolic foods reminiscent of the Hebrews’ painful history in Egypt, their arduous journey to Israel, and ultimately their redemption.

The traditional seder plate includes items such as a bitter herbs (representing the harshness of slavery) and a hardboiled egg (representing new beginnings). But tonight, the Kaufmanns introduced a new item to the seder plate: a single cannabis leaf, to symbolize protest and freedom. Meanwhile, guests had the option to substitute or supplement the seder’s traditional four glasses of wine with four bowls of weed. The cannabis seder, a project of the Kaufmanns’ nonprofit Le’Or (Hebrew for “to light”), stands out amidst a movement linking spirituality with social justice — in this case, speaking out against the ills of the Drug War. The Passover story of freedom is particularly suited to a discussion on drug-based imprisonment and systemic racism, but seder guests of other faiths also found the message to resonate in their own traditions.

“I’m troubled by the fact that in this country, it’s become synonymous to think of faith based activism as a right-wing thing, and I think it’s important to remember that many of our most important and memorable civil rights leaders came from a faith-based tradition,” says Roy Kaufmann.

“We live in probably among the best times in history to be alive and Jewish on Earth, and for white-skinned Jews, there’s a tremendous amount of passing privilege as it were,” he says. “So that part of it was a motivator to create this organization because it was frankly total BS to see all the people I grew up with facing no repercussions for the same thing other kids were doing {smoking weed} but had their lives fucked up for it.” African Americans are nearly four times more likely than whites to be arrested for simple drug possession, despite comparable rates of use.

“It’s a moral imperative, a spiritual imperative, and also intersects with the long history of this plant, so why not explore that and help people make those connections,” says Kaufmann. “Cannabis prohibition pays for the Drug War. The Drug War underpins what’s wrong with our society. It’s institutionalized racism, a system that replaced slavery with a way to guarantee prison inmates.” Jewish or gentile, the Kaufmann’s seder made a point that the Drug War is today’s Egypt, imprisoning a class of people based on their race or ritual (using cannabis), much like the Egyptian ruler Pharaoh did to the Israelites. The Haggadah, or text that guides the seder ritual, even had a page dedicated to Bob Marley, supporting the agnostic theme of exodus. (The Haggadah’s inclusion of the “Redemption Song” lyrics was a fitting touch, as well.)

In fact, so accessible was the seder, it even inspired Nusheen Bakhtiar, who works for weed testing facility MRX Labs and formerly with Dope Magazine, to host her own 420-friendly, anti-Drug War Nowruz celebration, connecting cannabis to her Muslim faith and the Persian New Year.

“I myself think of cannabis as my most ritualistic thing in my life with the most ceremony involved,” she says. “Some people have their cup of coffee, some do yoga, I smoke a bowl. I felt very primal choosing over red wine and cannabis, like I was engaging all my senses and could meditate and focus on what it was that we were calling the intention on.”

Bakhtiar explains that Nowruz, like Passover, is also a highly symbolic springtime festival. “We have our own set of things that are set on a table that symbolize something different for the Persian New Year,” she says. “Plus everyone has been smoking cannabis forever.” Cannabis has its own place in Persian history, Bakhtiar adds.

“One of the best ways to administer this medicine is through faith, cannabis brings you closer to your truer self, and gives people the right amount of ‘fuck it’ to be true to themselves,” she says. “I don’t think cannabis can and should exist in this world without remembering that it has incredible spiritual applications that shouldn’t be taken for granted.”

Cannabis, in fact, played a role in Biblical times, too. The kitoret, or ritual incense burned in temple, was in part made from kaneh-bosm, often interpreted as meaning “cannabis” in Biblical Hebrew. Meanwhile, the holy anointing oil referenced in religious text called for no less than nine pounds of kaneh-bosm. 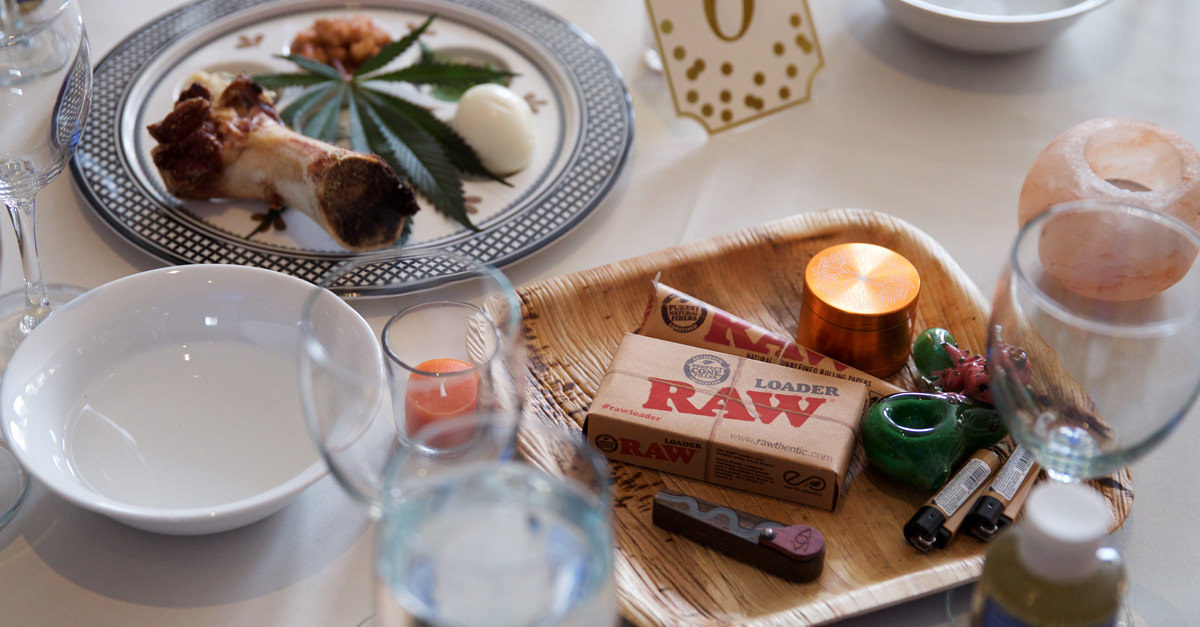 For many, religious morality supports their approach to the Drug War. “Punishment as a way of affecting one’s behavior and reaching others is wrong and immoral,” says Reverend Al Sharp, another seder guest and executive director of Clergy for a New Drug Policy, an interfaith organization mobilizing clergy against the War on Drugs. “The Drug War is fundamentally punitive and creates an ‘other’ in our society. The faith I believe in calls for allowing people to flourish in society and love each other, and if you’re punishing people you’re doing just the opposite.”

No Christian use of the law says punishment or “retribution” is the answer, adds Sharp. “Jesus didn’t go around preaching retribution.” Incarceration goes beyond putting people behind bars, but has the potential to forever impact their lives, compromising their employability, education, or other opportunities.

Sharp advocates for a harm reduction approach to problematic drug use, rather than a punitive one. “Trying to transform that culture of punishment in relation to drug use and the War on drugs means changing the drug laws, and legalizing marijuana and medical marijuana.”