Traveling to Portland, Oregon? Be sure to check out a few of the city’s seemingly infinite vintage shops, food trucks, and dispensaries. The Portland area is also known for its breathtaking beauty within the city, and around it. So whether you came for the legal weed tourism, or you’re simply looking for the best places to blaze and things to do while you’re high, here are a few suggestions to make your trip a little more groovy.

If you’re super stoned, this janky old amusement park will weird you out in all the right ways.
Built in 1905 and ranking as one of the ten oldest amusement parks in the country, Oaks Park is known as the Coney Island of the Northwest. Go roller skating in the rink, play mini golf, compete at carnival games, or get baked and go on a ride, Oaks Park will be sure to trip you out.

Council Crest is known to be one of the most scenic spots in Portland. Reaching 1,073 feet above sea level, it’s also the highest point in the city — a great place to go when you’re, well, high. On a clear day, you can see five mountains from this point, including Mount Hood, Mount St. Helens, Mount Rainier, Mount Jefferson, and Mount Adams. You can drive there, but if you’re going to be high, better to park at the bottom of a trail, light up, and then hike to the top.

Locals know that everyone goes to this late-night diner when they’re high. Open till 3 am on weekends, Stepping Stone is located in northwest Portland near the trendy Pearl District. Once you’re finished shopping and getting high, stop here for munchies. While breakfast is served all day, this diner also includes various staple munchies like nachos and tater tots.

Portland isn’t named “City of Roses” for no reason. If you want to get high and feel like you’re in a fairytale, visit the International Rose Test Garden in the southwest quarter of the city. Established in 1917 in the midst of World War I, the rose garden was meant to preserve the species of European roses that might have been destroyed during the war. Today, if you’re going to visit, there are more than 7,000 rose bushes. June is usually when they’re in full bloom. 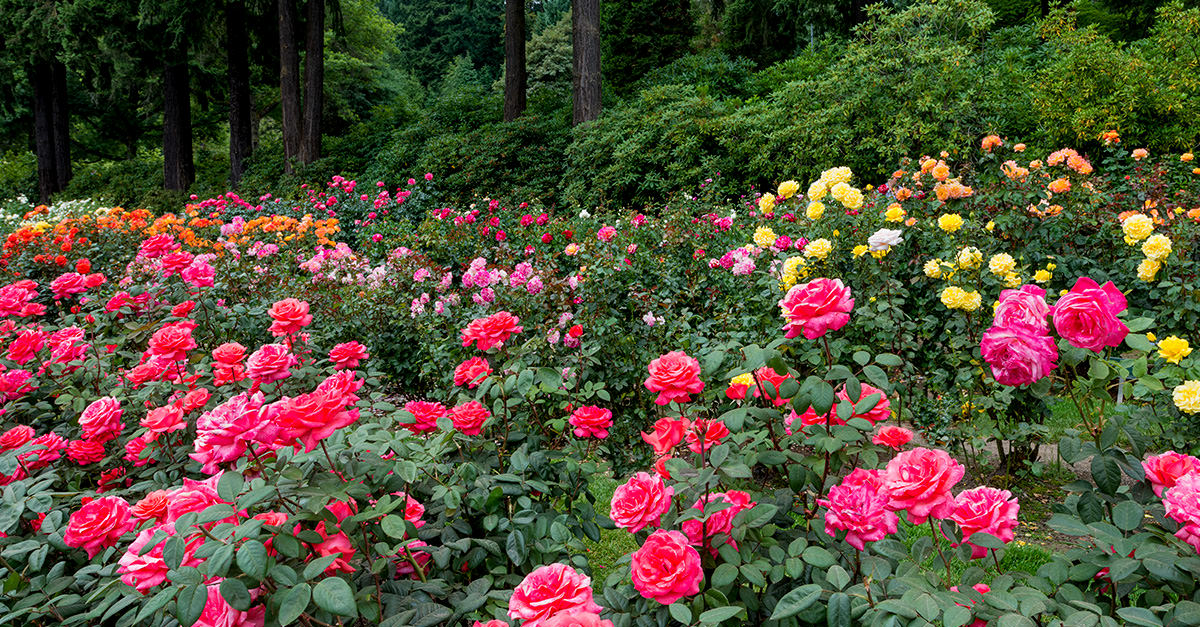 Be careful, you might be stuck here for hours. If like to get baked and get lost in bookstores, you definitely won’t get bored at Powell’s. The bookstore takes up an entire city block and four stories, totaling 68,000 square feet full of books. With more than 122 major subject areas and 3,500 subsections of genres, you could easily spend your whole trip waking, baking, and browsing this world famous bookstore.

Portland locals might tell you they used to go here to blaze during high school. This age old smoke spot is a moss-covered stone ruin in the wilderness. It has some history to it, too. The actual structure was built in 1950s to house restrooms and a ranger station, but it also sits nearby the old Balch family cabin. A bloody 19th century dispute between the Balch and Stump families marked the Witches Castle as a murder site. According to a plaque in the park, “Near this site stood the cabin of Danford Balch…In 1859, Balch was convicted and hanged for shooting his son-in-law.”

Built, owned, and operated by musicians, Mississippi studios is the place to go when you’re high and want to dance. This spot showcases all kinds of musical genres, and is located in a converted church in the city’s hip and gritty Mississippi district. If you get the munchies, the attached Bar Bar has some of the best burgers in town.